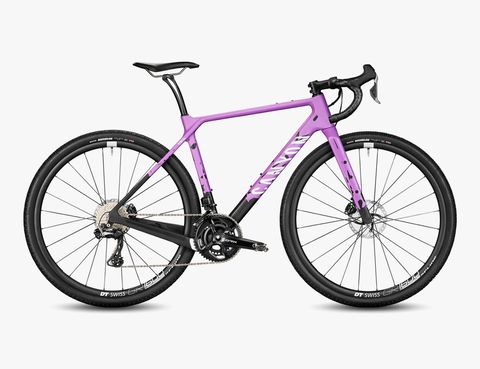 Every bike brand has a personality, and as much as a brand’s engineering feats and podium spots enhance its rep, the brand’s personality is often what connects with riders.

The following premium bike makers craft some of the world’s finest rides, backed by the most advanced technology and design — and they all have great stories too.

So next time you’re shopping for new wheels, consider what makes these brands special, and you might end up not only scoring a fantastic bike but also getting plugged into a cool new community of enthusiasts.

When Cannondale shifted from making bike trailers to making bikes, the small team started from scratch. Fat, light, stiff aluminum frames quickly became signature — and put Cannondale on the map as an innovative, risk-taking bike company. The brand’s first mountain bike was quirky too. The SM-500 had a mullet spec — a 24-inch rear wheel and a 26-inch front wheel. The brand built one of the first production suspension bikes, the EST, before suspension was a thing. Then it got rid of one side of the fork, debuting the Lefty and later the Ocho. Cannondale manufactured the first production downhill bike, and it made the first production inverted moto-style fork.

In the sports marketing space, the Volvo Cannondale team brought Euro-pro team organization to mountain biking, while infusing it with a distinctly American flash, including larger-than-life personalities and wild team prototypes. Cannondale placed the first oversized aluminum bikes in the peloton and had the first and last alloy bikes win a grand tour.

Turning 50 this year, the Connecticut-based brand is leading the conversation on a collaborative approach to cycling’s diversity problem.

Direct-to-consumer brand Canyon was founded by Roman Arnold in his garage. Based in Germany, it has grown into a global name that creates cutting-edge designs for the top riders in the world in every cycling discipline, with wins at the Tour de France, Enduro World Series and Ironman Kona World Championships. The company has won prestigious awards, including Red Dot Design Awards for the Grail, the Speedmax — a five-time winner at Ironman Kona — and the Spectral:ON. The Canyon design team also won ‘Design Team of the Year’ from Red Dot.

Canyon’s M.O. is to make the best bikes in the world for the best riders in the world, then produce those bikes for the public. Canyons are the most affordable high-end bikes. Order one and it’s delivered to your home or office. Bikes can be assembled in under 30 minutes, and the tools you need come with the bike. ‘White glove’ delivery is also available, as is bike fit, and once you commit, you can pay with flexible financing.

Canyon is embracing the bike boom by working to make cycling welcoming to all riders with support for programs like the first HBCU cycling team at St. Augustine’s University and Flashpoint MVMNT, a new kind of gravel team aimed at increasing diversity and focusing on people over podiums.

A small, engineering-focused brand, Ibis strives to build high-quality bikes that will last a lifetime, that are easy to maintain, and that provide incredible pedaling efficiency and downhill performance using the brand’s DW-link suspension.

The Santa Cruz, California-based outfit popularized wide mountain bike rims and carbon fiber in full-suspension mountain bikes. It pushed for modern geometry with the Ripmo and lighter suspension tune with its Traction Tune. It’s about to launch a model that will drastically reduce bicycle manufacturing power consumption, carbon waste and shipping impact. The brand is actively working towards being carbon neutral.

Ibis’ head industrial designer and co-owner Roxy Lo developed some of the first bikes tuned for lighter riders. She also spearheaded the design and build of small-frame bikes with the same features as bikes with larger frames. Recently, Ibis has focused on affordability, bringing the innovations and performance they’ve developed to a wider audience.

Niner has always taken a lighthearted approach and catered to cyclists of all abilities and outdoor pursuits. Exhibit A: this bottle cap friendly head tube cap. Longtime supporters of IMBA, People for Bikes, and local advocacy organizations, Niner is a big believer in the importance of community, inclusion, and access to public lands for all.

Chris Cocalis has built bikes since 1988. He’s also developed technologies, like Super Boost Plus, that have been adopted by component companies and other brands. Pivot Cycles has spent more than a decade perfecting and elevating the science of carbon frames, which earned founder and owner Cocalis the nickname “King of Carbon.”

Cocalis has staffed Pivot with people who share his goal of pushing technical design in pursuit of performance — and having fun doing it. Engineers, designers, athletes, industry veterans and storytellers continue to help him bring that vision to life

Bikes have always been as much a part of the culture at Oskar Blues Brewery as beer has. In 2011, when founder Dale Katechis’s bike was stolen, he wanted a new one made by hand in the USA. So he founded REEB Cycles, a small custom bike manufacturer based in Lyons, Colorado.

Housed in the 100-year-old barn where Dale’s Pale Ale was first brewed, REEB’s employees are obsessed with two wheels and committed to progression on the trail and in the fabrication shop. Now in its 10th year, REEB’s product line has expanded from steel single speeds to hardtail mountain bikes, gravel bikes and made-in-America full-suspension mountain bikes. Customers can choose to personalize any model with component spec, paint, and custom geometry for a unique ride.

Riders are welcome to stop in for a demo out the back door or to sip a brew and talk shop. If you’re lucky, trials rider and REEB employee Jeff Lenosky might be there to show off what REEB bikes can do. If you miss him, check out Lenosky’s YouTube channel.

Founded in 1994 by then-pro skater Rob Roskopp, the brand’s first bike to market was a 4-inch travel full-suspension trail bike. Four inches classified it as a downhill bike, but it was made to pedal uphill too.

There’s a deeply rooted DIY spirit at Santa Cruz — the brand doesn’t outsource. All development, prototyping, design, engineering, testing and assembly is done in-house in California. The biggest bicycle assembly plant in the U.S. is 100 percent solar-powered, and 100 percent of its packaging ‘waste’ is either recycled or re-used. The brand is famous for its lifetime warranty, which applies to its frames, Reserve Carbon wheels and even its pivot bearings.

Named after Sun Valley, Idaho’s Ed Scott, inventor of the first tapered aluminum ski pole, Scott Sports has been a leader in ski, moto and cycling since 1958. The Swiss brand developed the first aero bars, which Greg Lemond rode to win the 1989 Tour de France, and the first road bike frame weighing less than 1 kilogram (about 2.2 pounds).

Innovation, technology and design have always driven Scott. Its Twinloc suspension has been ridden to countless cross-country World Cup victories and applied across the brand’s entire line of full-suspension bikes. Scott was the first brand with fully internal cable routing for both electronic and mechanical shifting.

Beyond Scott’s efforts to push the boundaries for bicycle technology, it strives to make bikes and gear for every cyclist. Technology, design, innovation, and materials trickle down, making each Scott bike best in class.

In the early ’70s, hippie bike rider Mike Sinyard sold his prized VW bus to fund a European bike tour. After a chance meeting with Cino Cinelli, he spent his savings sealing a deal to import performance bike parts to the U.S. Back home, Sinyard rode his bike and trailer around San Francisco selling high-end “specialized” bicycle components to shops, and the brand was born.

Since then, Specialized has continued developing cycling gear, investing heavily in research and design to bring innovation to as many riders as possible. Its “Win Tunnel” and four global innovation centers help engineers redesign gear to make top pros, as well as everyday commuters, faster. With a recent focus on electric bikes, Specialized strives to get more people riding to improve their mental and physical health and reduce global emissions.

The company shares staff with its sister brand, Revel Bikes, which was founded two years ago and has already staked its claim in the high-end, carbon, full-suspension mountain bike space with its CBF super-efficient pedaling, super active braking and climbing suspension paired with modern, but not too modern geometry.

The brands’ techy engineers use their carbon experience to push titanium to its full potential. Why has five models, from a gravel bike to a titanium dirt jumper, aptly named Why TF, or WTF? Bikes are handmade with a lifetime warranty, and they showcase the magical feeling of riding a titanium bike.

Before mountain biking was even considered an industry, Yeti’s racers were the backbone of its product development efforts. Since 1985, when Yeti was born, their drive to top the podium has driven what they do, which is why every bike sports the company tagline, ‘Ride Driven, Race Bred.’

Things really took off a decade ago, when the brand developed Switch Infinity, which took suspension technology to new heights. It’s a translating pivot that switches direction as the bike moves through its travel, providing a tailored anti-squat curve while allowing the leverage ratio to be tuned independently, something other systems can’t physically achieve. What that means: whether racer Ritchie Rude hammers a Yeti SB150 at full throttle down a course, or you take it out on your local trails, the suspension feels plush and infinite. Combine that with truly outstanding engineering on every bicycle, and you won’t find another bike that rides uphill and downhill as well as a Yeti.

You also won’t find a staff or fan base that loves biking more. Yeti’s enhanced suspension Lunch Ride models all came from the brand’s infamous daily hammer fest on the trails behind the factory. Stop by the Golden, Colorado headquarters for a frosty mug, a trip through the lobby museum and a demo rental. Or join the hordes of riders who gather in a different Colorado town each summer for a two-day festival celebrating their love of Yeti Cycles. The brand remains authentic and humble. Long-time owners Chris Conroy and Steve Hoogendoorn show up and tend the grill, giving back to the riders who have helped Yeti thrive for more than 35 years.

A recent injection of cash into the final crumb reveals why...

- September 7, 2021
0
Last Crumb has completed a $ 1 million seed round to expand production of its luxury biscuit line. Audrey Ma...

5 surefire methods to cut back the danger of dropshipping

Millennials Reveal Their 105 Favourite Manufacturers, From Gucci to Amazon

Learn how to Keep away from Model Ambassador Controversy in China...